At the close of Week 3 excavation within the interior of the moated site is well under way with four trenches open and two more planned.

Trench 2 has now been fully recorded and temporarily closed until permission can be granted to extend the trench further to explore the cut just caught in the west facing section.

Trench 1 continues to turn up features. We have excavated the cut feature found in Week 2 and found a clearly defined linear cut probably for a fence line made from wattle based on the imprints preserved in the clay. The wattle was supported by intermittent posts. Next week we will turn our attention toward the numerous deposits identified, particularly the rubble spread and a possible posthole packed with stones.

Trenches 3 and 4 have now been cleared of their topsoil and subsoil with lots of modern and post-medieval material recovered. We are now down to a clay deposit with numerous potential cuts and fills that will need recording and then excavating to determine if they are natural or human made. 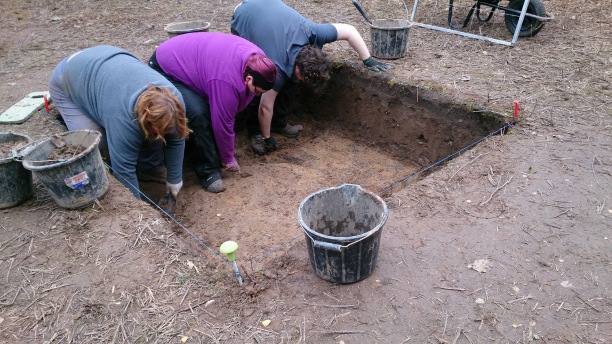 Trench 4 getting a good clean before excavation of several potential features.

Next week we will also be opening a long 5x1m trench to explore a variety of low and high resistance features. Stay tuned!!!!

As part of our on-going post-excavation our volunteers are invited to participate in regular training sessions. So far we have looked at topographic survey, pottery analysis and human skeletal remains. This past weekend we took a look at what animal bone can add to the interpretation and analysis of archaeological sites. Ian Smith gave us a great intro to the identification of various animal species. 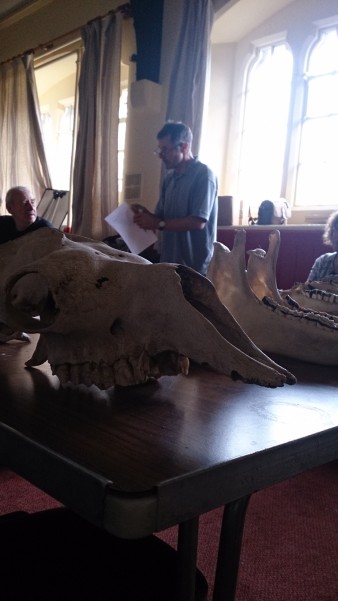 Ian and his camel skele

Some were typical species such as cattle and sheep but others were a little more exotic like Ian’s camel skele. Our volunteers certainly seemed to enjoy themselves, as it got a little competitive in the group identification exercise!

The volunteers getting a quick intro

The competition hotting up!